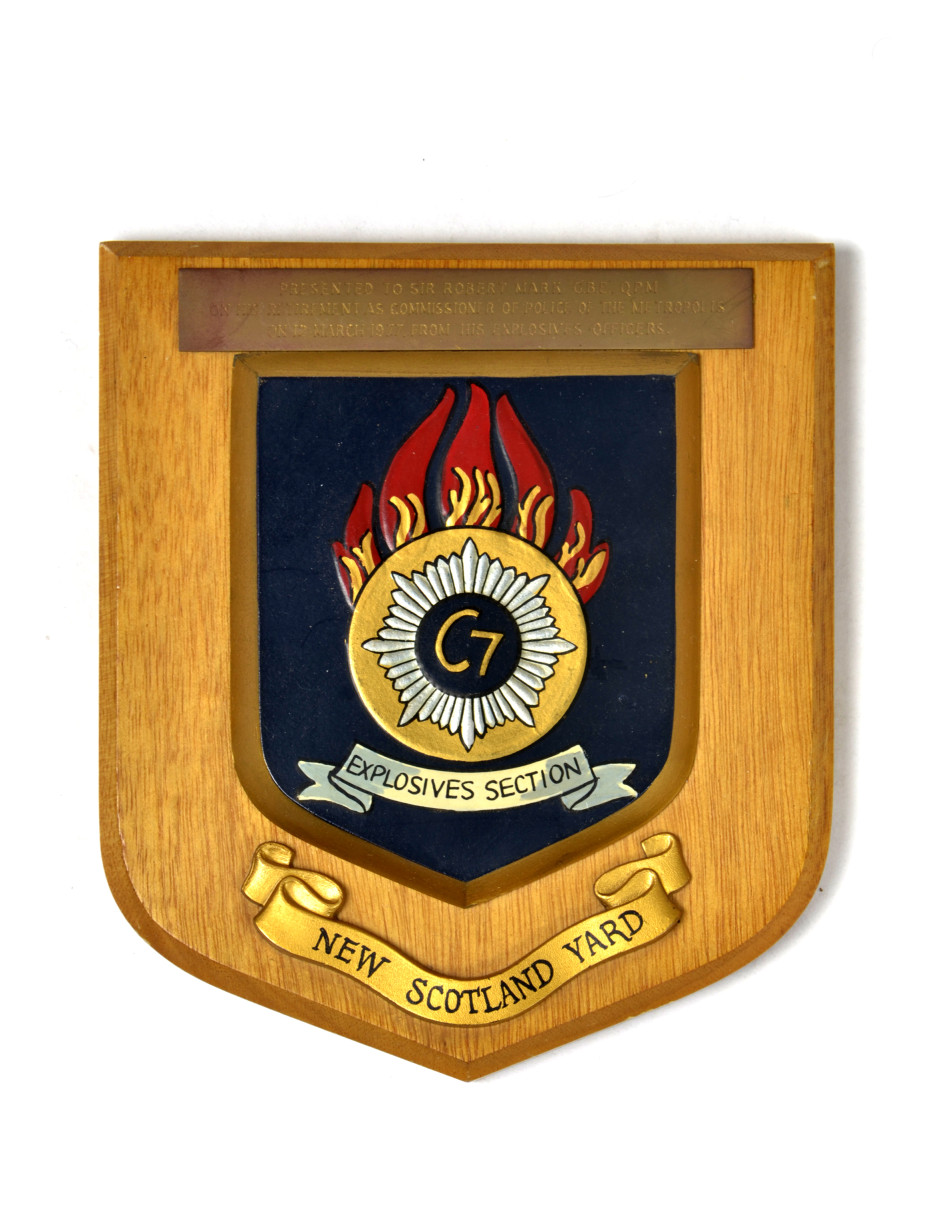 This shield was given to my father by C7, the Explosives Section of Scotland Yard. One of the officers from this section was Captain Roger Goad, who was killed in 1975 whilst bravely trying to defuse a bomb. Here is the address that my father gave at his funeral:

According to Saint John in the 13th verse of the 15th Chapter of his version of the Gospel ‘Greater love hath no man than this, that a man lay down his life for his friends’. Those immortal words prompt the thought that such love is even more remarkable in a man who lays down his life not for his friends but for his fellow men. For this is what Roger Goad did in the full and certain knowledge of what he was doing.

Can there be any greater contrast for a man to contemplate than his quiet courage and self sacrifice with the behaviour of those who caused his death? The spawn of hatred, ignorance and prejudice, whose recourse to indiscriminate murder and destruction bears eloquent testimony to their inhumanity and unreason.

We are here today, police, army and civilian to pay tribute not only to Roger Goad, richly though he deserves our respect and admiration, but to pay tribute also to the ideals which he personified and which we, as a nation value above life itself, that a man should live in a world which puts justice before force, logic before emotion, and humanity and compassion above all.

His cruel and wicked murderers might understandably evoke our hatred, but that would not be what Roger Goad would wish. For he was willing to give his life for the preservation of those standards we most value. Rather are they to be pitied for the mindless brutes they are, devoid of reason, devoid of humanity, deserving only of the contempt of their fellow man. They do, however, serve one useful purpose. They offer a stark contrast against which the nobility and unselfishness of this gallant man will be judged not just by his family, his friends and his colleagues but by the world itself.

Roger Goad’s wife and children are called upon to pay the heaviest price of all, the loss of a beloved husband and father, and we must do all we can to lessen their grief and their burden. We all share that loss; but paradoxically we are the richer for it. For there are few acts which by their nobility, their unselfishness and their example enrich us all. And this was one indeed.

Another Briton, facing on 12 October 1915 the certainty of a no less barbarous and unnecessary death, used words not dimmed by time which still voice the noblest aspiration of civilized man.

‘I realize that patriotism is not enough. I must have no hatred or bitterness towards anyone.’

That is an ideal not likely to be attained by all but it is an ideal to which all should aspire. Whatever our reaction as individuals, however, this pledge I offer to Roger Goad, his wife and his children that in dealing with the evil which cost him his life, whatever its source or numbers, we shall not weaken or relax our efforts whatever the cost, whatever the sacrifice. His memory will be hallowed so long as freedom and humanity mark the British way of life.

May he rest in peace; may his family be sustained by the splendour of his example and comforted by the sorrow and sympathy of his comrades and may we, the police of Great Britain, be inspired by his sacrifice.