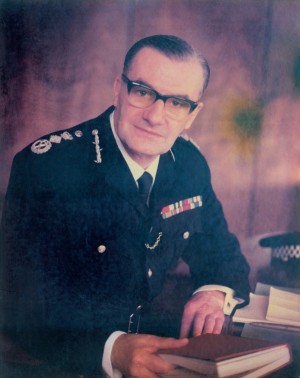 This is an interview with Sir Robert Mark, the last surviving child of John and Louisa Mark, on 21st September, 2006, that was written by his daughter, Christina, and read at the Mark Family Gathering in Warboys, in Cambridgeshire, on the following Sunday.

‘My father was born in very humble circumstances in Leeds. He didn’t speak much about his early years and never about his parents or his background. He left school early and was apprenticed in the Rag Trade, in Ladies’ Mantles. He worked hard and well, securing a job at J and M Phillips in Manchester, before founding his own firm, John Mark and Sons, Mantles, in Jersey Street in Ancoats, where he eventually employed around a hundred people.

My mother, Louisa Hobson, was born in Leeds in similar circumstances. She was intelligent, hard working and a wonderful cook. She was never able to exert her talents outside the home – for instance she had an exceptionally good singing voice and sang in a choir in Leeds before emigrating to Manchester!

My father had a working class view of life: his first passion was his family and their security and wellbeing; his second was sport, in the form of cricket, Leeds United football team and rugby – indeed his support of the latter was so enthusiastic that he was asked to stay away from some of the matches, as his behaviour was so exuberant!

Neither of my parents was given to expressing emotion openly to us so our domestic relations as a family were governed by Yorkshire reserve, though nonetheless warm and sincere. Their first home was in Moss Side and the second in 25 Clarendon Road West in Chorlton-cum Hardy, where I was born. We then moved to Tintern Lodge, a huge Victorian house with many rooms on several floors, a large garden and a garage with a sloping wall because my father kept backing the car into it! We weren’t well off – the most pocket money that I ever had was 6d a week [old pence, roughly 3p in today’s money] and tram fares to and from school were 2d a time, so it didn’t go very far. The only contact with relatives that we had was with my mother’s sister, Auntie Annie and her husband, Uncle Joe, who was a quack [unqualified] dentist and a cousin called Albert.

I remember my brother Jimmy and I having Measles at the same time and sharing a room. He told me the entire story of King Solomon’s Mines. I loved it so much that when I recovered I joined Manchester Public Library and read everything by Rider Haggard and Edgar Wallace. I have loved reading and borrowed books from a library ever since, and I have Jimmy to thank for this.

The girls, Connie and Rene, weren’t encouraged in their education but all three boys won scholarships to William Hulme’s Grammar School ,where we were guided by the Headmaster, Trevor Dennis, to learn musical instruments: Jack the oboe, Jimmy the bassoon – quite excellently in my opinion, and I the clarinet. As we got older we used to have the most wonderful New Year’s Eve parties in Tintern Lodge, filling the house with people and playing music that made the rafters shake!

When Jimmy won an open Scholarship to Cambridge, my father’s joy was unbelievable, even though I suspect that he didn’t really understand the significance of it. I became Head Prefect, Captain of Rugby, Captain of Lacrosse, Vice-Captain of Cricket and did absolutely no academic work at all! I eventually got a job as a salesman at Templeton’s Carpet Factory, where I stayed for two years and was paid 17 shillings and sixpence [less than £1 a week] a week. I applied to join the Rhodesian Police but was turned down because I was too young. I was advised to apply to the Manchester Police Force, which I did, and was accepted. My father was horrified – he said that it was a downward step, in fact only one step away from going to prison! However he changed his mind as I progressed through the ranks and eventually became the Chief Constable of Leicester when I was 39. He gave me a second hand Ford Consul, in which my brother Jack drove me to Leicester, as the only thing that I could drive at that time was a tank! He took me to a hotel in Leicester and then took the train back to Manchester – it was very kind of him to go to so much trouble for me.

As I became more well known it was said that such was my father’s enthusiasm about my work that he could clear the bar in the Northleigh Club in record time! I wish that he could have lived to see me become Commissioner of the Met, but feel that he would have made the whole of Manchester uninhabitable!

My father matured well for one of his upbringing. He became a Freemason and a Worshipful Master, took up golf and played it for the rest of his life. I think on the whole that he was happy with his life and was the first one of the family to pass away.

I was very grateful for my time in the army during the war: it was an excellent preparation for serving as a police officer. Just think, I’ve sat in an outside toilet to smoke a pipe when I was a bobby on the beat on nights, when there was nowhere else to get warm, and I’ve sat in the Dining Room at Windsor Castle being entertained by the Queen – from the ridiculous to the sublime or from the sublime to the ridiculous – it all depends on your point of view!

I would like to conclude this interview with 3 quotes, which I found in a box of press cuttings about my father. They are all responses to his autobiography: “In the Office of Constable”, which he wrote after he retired as Commissioner of the Metropolitan Police in 1977. The first relates to my mother, Kathleen. It is from a letter of congratulations written by a man called Frank Hulme, who was a Detective Sergeant in the Oldham Borough Police. He sent his kindest regards to my father and to “your dear wife, who gave you such wonderful support throughout your distinguished career”. Indeed she did. Kathleen had a fine intellect, coaching my father through his exams in the early stages of his career, and a great sense of humour and a sharp wit. She stayed calm during the turbulent events in their lives, during the many bombings in the war and the death threats that he received as the Commissioner of the Metropolitan Police. She helped my father to keep a grounded perspective and always provided a comfortable home and a secure presence for him to return to after a demanding day’s work.

The second quote relates to a letter from Uncle James, who observed in his astute academic fashion that my father was a kind of Platonist, because he was interested in a kind of society in which there is an orderly state of affairs, so that each individual is free to live their own life. I believe that I am a kind of Platonist as well, as for the last 29 years I have been studying the works of Ibn’ Arabi [1165-1240], one of the greatest mystics who is known in the east as the “Sheik al Akhbar” and in the west as “Doctor Maximus”. He is sometimes called the “Son of Plato”, because he drew from Plato’s Theory of Archetypes to develop a metaphysical ideology on the unity of being and its unique reflection in every being, which can only become known through the freedom of self knowledge. Like father, like daughter, perhaps, although neither of us would have recognized the Platonic influence when embarking on our respective careers, he as a policeman and I as a nurse.

The third quote comes at the end of a book review written by C.H. Rolph: “This is a vivid, tactless, opinionated, generous, funny, vital book; utterly without precedent, and since no-one but a policeman could have written it, most unlikely to have successful imitators. Intending imitators should anyway be very, very careful unless they have Sir Robert Mark’s exciting gift for dancing around the lips of deep craters on tiptoe.”

So, here’s to the dance!